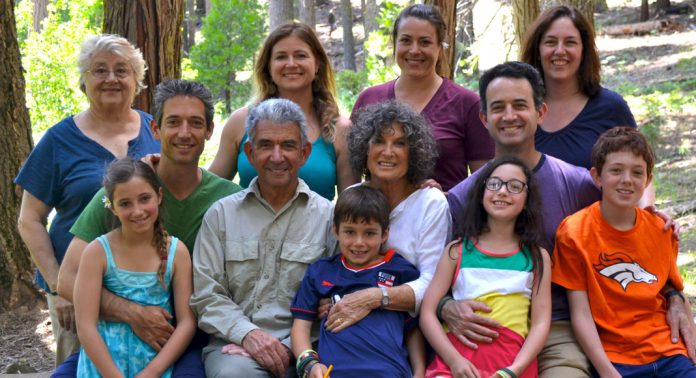 Not Only One of the Best Surgeons But Also a Wine Taster, a Cook and a Great Family Man

Dr. Samuel Masket has been involved in clinical research all of his career and has published well over one hundred papers and two textbooks. He is not only one of the best surgeons but also an internationally invited speaker. He has presented many named lectures and is a family man, a wine taster and an amateur chef. 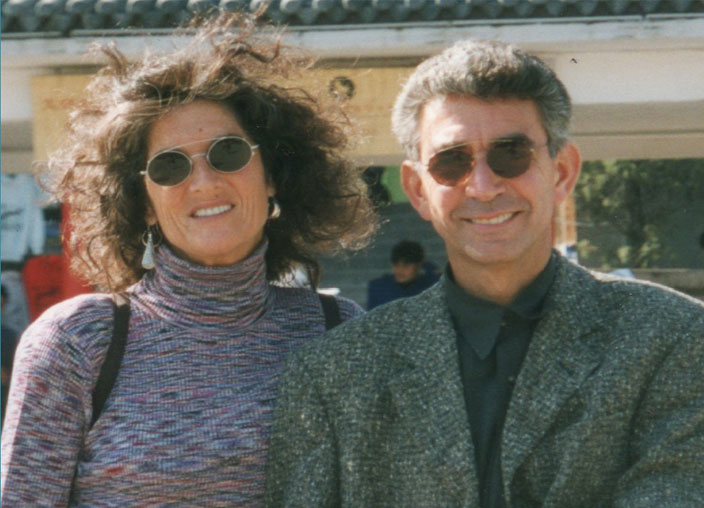 He has been an invited guest surgeon throughout the world. Along with many named lectures, he has presented the 1998 Binkhorst Medal Lecture, the 2013 Kelman Memorial Lecture at the annual meeting of the AAO, and most recently the 2014 Jan G.F. Worst Lecture at the International Intra-Ocular Implant Club Meeting in Boston.

In 2013, Dr. Masket embarked on a new adventure with the establishment of the Samuel and Barbara Masket Foundation. The first mission of the foundation is to provide ongoing ophthalmic clinical research. The second mission is to provide state-of-the-art eye care for patients with inadequate resources. The third mission is professional education. By 2016, the foundation was able to begin funding patients.

It was such a pleasure to interview him; we talked about ophthalmology, the days of his youth and his private life.

So first of all; tell me a little bit about yourself.

I was born in New York City 76 years ago. I was raised on the east coast, in the New York area. I went to college in the Midwest and then went to medical school and had my ophthalmology training in New York. In those days, the United States had compulsory military service. I served two years as an ophthalmologist with the U.S. Navy just after the Vietnam War. Eventually, I resettled in California, and I’ve been there since 1977.

Were those days hard for you?

No, in the navy, it was like working in a hospital. I never faced combat. The difficulty was to take care of many young men who were seriously injured as a result of war.

So, what about your childhood?

I have an older sister. We grew up in what was a very typical American family. We lived in a suburb of New York, where I went to high school. I would say my childhood was very typical of that day — of that era. 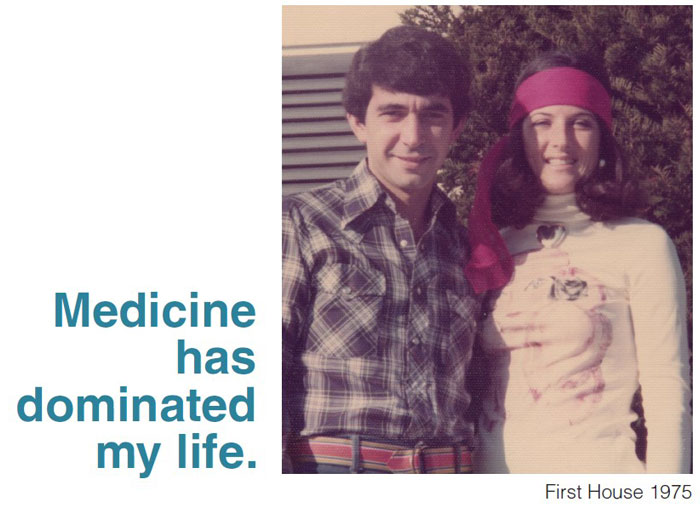 Where did you meet your wife? Do you have children?

I met my wife in college when I was 19 years old, and we are married nearly 54 years. We have two sons (51 and 49). They are both married, and each has a son and a daughter; we have grandchildren that range from 18 to 12 years of age. 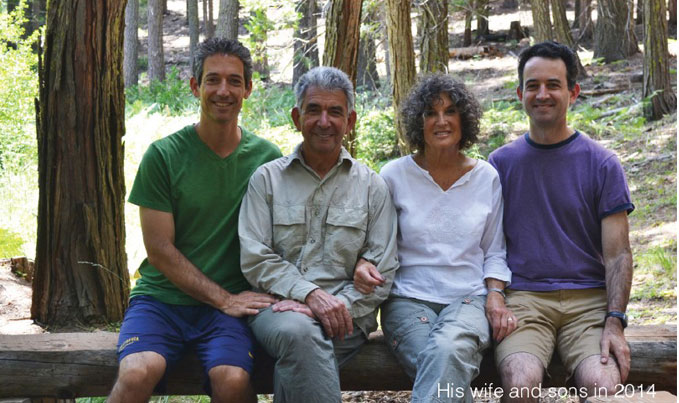 Why did you choose to be a medical doctor?

When I was a child, there was great respect for physicians. It was considered to be the highest profession that one could attain, and a great challenge intellectually. The world has changed, but in those days being a physician commanded great respect, and medicine matched my skills with my interests and my challenges..

I had planned to be a cardiothoracic surgeon, but in the last year of medical school I had an injury to one of my eyes. It required me to be hospitalized, and I was put in the eye ward with both eyes patched. As I could not see, I listened intently while the residents
made morning rounds, and it seemed to be a fascinating and exciting field. Before that moment, I had not been exposed to ophthalmology as a medical student. It was unlike other fields in those days, in that one could see the tissue and the pathology. Once exposed as a patient, I became excited about ophthalmology and came to realize how important the eyes and vision were to people’s lives, their function and their independence.

What excites you the most?

The thing that excites me the most, currently, is negative dysphotopsia. This post-op complication has been an enigma over many years. It was first described in 2000 by Jim Davison. I’m considered to be one of few experts regarding the condition and yet, if you ask me the truth, there is so very much that I and we as a profession don’t understand about it. 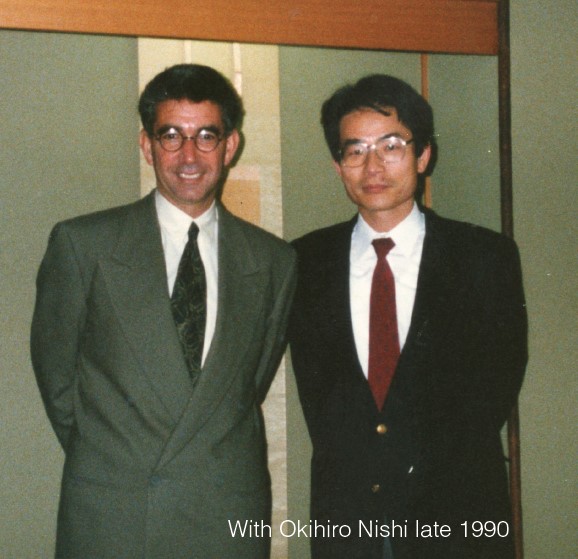 In my professional life, when I relocated here to Southern California in the late 1970s, I was very excited by the local
emerging technology that surrounded cataract surgery. All of the things that are seemingly commonplace now didn’t exist when I started. So, I was a part of the
development of many of these surgical advances and got to teach it worldwide. Being involved in cataract surgery has been my niche for many years — for more than 40 years. But from a personal standpoint, I take tremendous pride outside of my career with respect to my family. My
two sons are highly educated, one a Ph.D., the other an MD, and both university employed. Both are married with children; we have four grandchildren ranging from 18 down to 12 years. My wife is an architectural designer and an inventor.

We have an aging
population worldwide. And
there are diseases, I’m just
talking about eye conditions.
There’s another problem
that I see in cataract surgery
that has not been well
addressed, and really needs
to be addressed, and that is:
retinal detachment following
cataract surgery is far too
common. And we should find
a way to prevent that.

What changes are needed in the field of ophthalmology?

We need to find answers to certain common diseases that plague patients, particularly with advancing age. As an example, in the United States today, we have 60 million people between the ages of 55 and 85. That demographic is going to reach 90 million people before 2030. We haven’t found good answers to important conditions, such as age-related macular degeneration (ARMD) and glaucoma. Older glaucoma patients tend to have more aggressive forms of the disease, and we are far from having perfect treatment for glaucoma and the same for ARMD. In the developed countries, we are noting a “greying” of society in which many people beyond 90 years of age will be incapable of caring for themselves as a result of ARMD, glaucoma, hearing loss, etc. This represents an ethical issue for society that hasn’t been addressed. Distribution of resources will become increasingly problematic.

How can industry support clinicians?

I refer to the combination of surgeons and the better side of the ophthalmic industry as the surgical-industrial complex. It’s a marriage between what the surgeons need and what the companies can make. And together we have made huge progress in cataract surgery. It
requires cooperation between industry and the physician to bring good products to the marketplace and to weed out poor products and concepts. We are a complex team and need each other in order to bring the best product to the patient. My motto is “If it’s good for the patient, then it’s good for the doctor, and it’s good for the industry.” 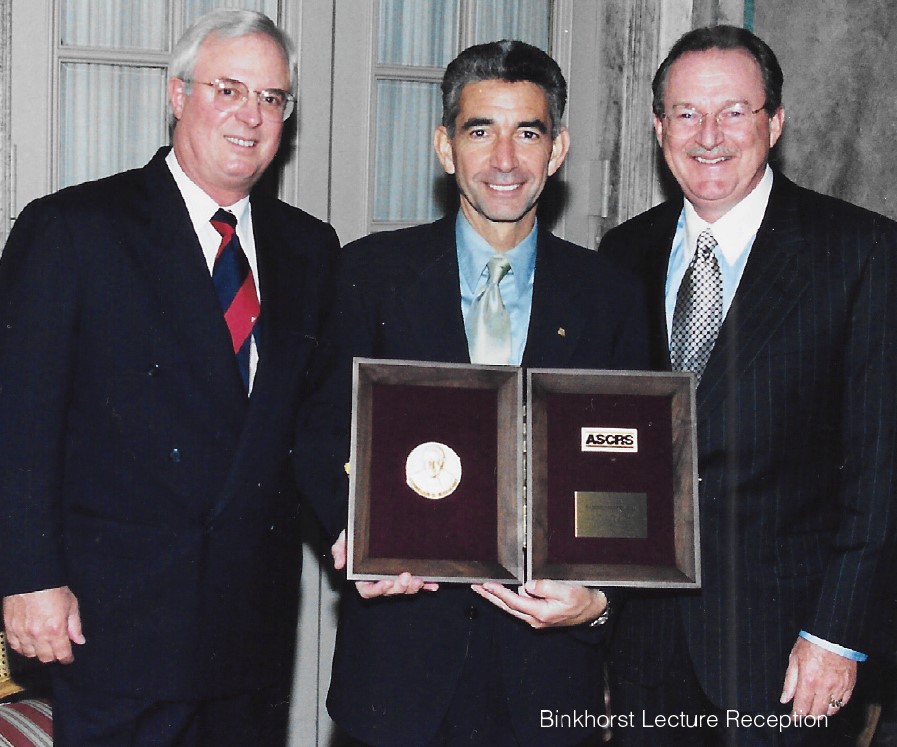 Do you have any advice about it?

We need a much more holistic approach than studying what drugs may help macular degeneration or glaucoma. This is a problem for society in general as we consider care for the increasing numbers of the very elderly.

An unmet need is the
incidence of retinal
detachment following
cataract surgery that is far
too common, particularly
in young, myopic male
patients; we need to find a
way to prevent it.

What’s your advice to junior ophthalmologists?

I can’t speak for other parts of the world, but in the United States, physicians have lost a great deal of the respect and autonomy that they enjoyed when I was a child. One aspect of the problem is that physicians have become more aggressive financially, and they advertise. (Advertising was illegal for physicians when I was younger.) This pattern induces consumerism in patients, altering the perception of the physician. Young physicians see many of their friends and colleagues who went into other fields — finance, law, business, entertainment — achieve wealth, while they are still in training and have traded their youth to become physicians. In order to be happy in medicine, you need to be intellectually challenged and satisfied with what you do. A physician hopefully can and should expect to make a comfortable living, to not have to worry about feeding and educating their children. 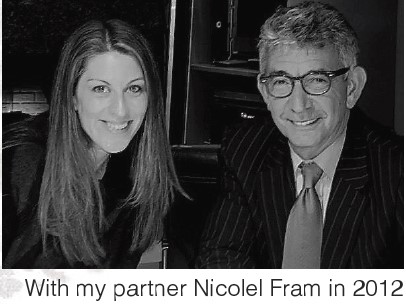 What have been the best moments of your professional life?

In my professional life, some of the best moments come from being recognized by your peers. Just last year — even at my age — I was very honored and blessed to be given an award for the best
paper of the year in the Journal of Cataract & Refractive Surgery. It was quite an honor.

I have a special interest
in food and wine. I enjoy
cooking, and I’ve been
collecting wine since the
mid-1970s. My favorite task
is to pair good food with
great wine. I tend to cook
chicken more than any other
main dish. I did play golf as
a youngster, and as I expect
to work less, I will be back to
playing golf.

Any recipe with the chicken?