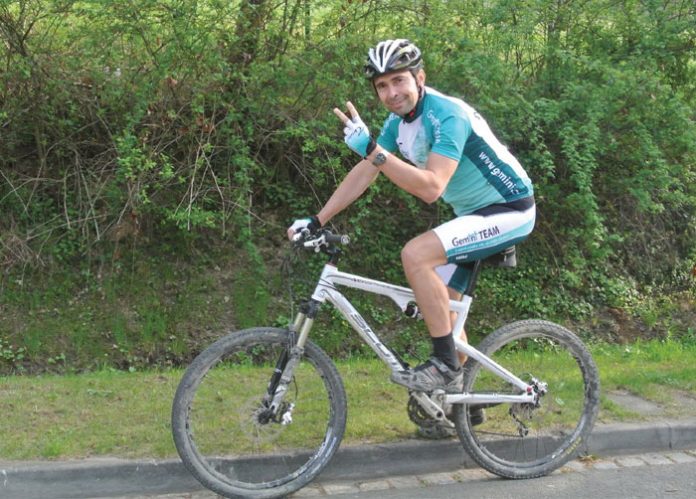 Dr. Pavel Stodulka, a Skilled Ophtalmologist and an Excellent Sportsman

I was traveling extensively in Western Europe and North America to observe and learn the latest eye surgeries.

You have 11 successful eye clinics in central Europe. Can you share with us the dreams you had at the beginning and your hopes for the future?

In 2003, I founded a private facility named Gemini Eye Clinic, and we started with cataract and laser refractive surgery. Later we added vitreoretinal and corneal surgery, including corneal cross-linking, intracorneal rings, PKP, DMEK, DALK and artificial cornea implantation. Today we run 11 private eye clinics in the Czech Republic and Austria, employing almost 400 people and performing over 30,000 surgeries annually. We have our own small R&D team. 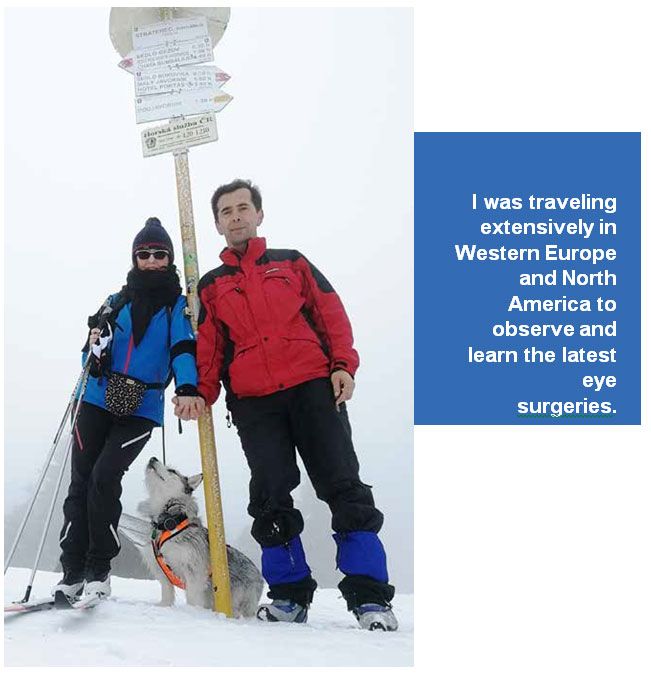 Can you tell us about your professional history?

I graduated in Czechoslovakia in 1989, just before the revolution which finished the communist era. I was traveling extensively in Western Europe and North America to observe and learn the latest eye surgeries. I was influenced significantly by a brilliant surgeon and innovator, Howard Gimbel, in Calgary, Canada, whom I have visited several times. We still keep in touch. I started to perform Lasik in 1994, a first in the Czech Republic. I was also the first to perform femtosecond laser Lasik, MICS, Avastin intravitreal application, 27G vitreoretinal surgery and hyperopic relex smile. 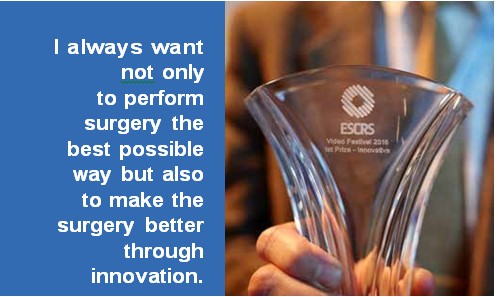 You performed the world’s first implantation of presbyopic phakic lens and co-invented CAPSULaser. What is your motivation for surgical innovations, and what projects are you working on?

Well, I always want not only to perform surgery the best possible way but also to make the surgery better through innovation. I was significantly inspired by Dr. Howard Gimbel in Canada, who was not only a brilliant surgeon but also an innovator. He was one of the inventors of capsulorhexis. I happened to work on CAPSULaser with a Californian startup company, and I have contributed to this project of smaller and more affordable laser since the beginning. Today CAPSULaser has received the CE mark and outside of Europe, it was successfully launched in Japan last June. I am happy that this instrument, which was co-invented at our clinic and first used by me on the human eye, is now starting to be used in clinical practice. Additionally I am working on biocompatible corneal inlays for presbyopia, which is one of the new development in ophthalmology industry.

Femtomatrix laser, developed by Keranova, is the world’s fastest laser for eye surgery. The laser beam hits the phase mask, and a matrix of laser beams is obtained. Typically it is six, nine or even more laser beams. Therefore, this laser cuts much faster than the current conventional femto laser. In cataract surgery, Keranova femtomatrix laser fragments a human cataract into 20,000 small cubes in 20 seconds. In refractive surgery, this laser is capable of creating a lasik flap in less than 0.5 seconds. This is a very exciting new technology in cataract surgery. We will present more results at the annual ESCRS Congress in Amsterdam. 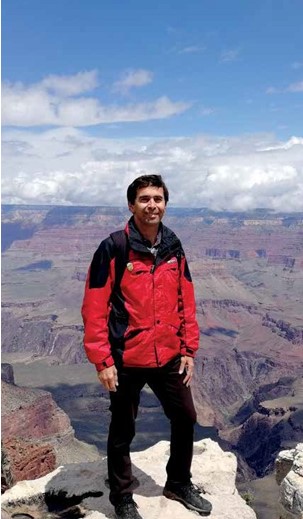 I have heard your favorite way to relax is through sport? Which sports do you do mostly?

Yes, sport is the best way to relax for me. I try
to swim almost daily after I come back from
work, and I also run. During the holidays, I like
to do sports with my family. We all go skiing and
snowboarding in wintertime. I got ski mountain
touring equipment for my 50th birthday, and
since then I do several ski alp trips every winter
with my friends and our kids. Last winter, we went up Austria’s highest mountain, Grossglockner, and to the nearby Grossvenediger. Both are over 3,500 meters above sea level. My mind frees up during such trips. Summer passes with rollerblading around the river in my home town, mountain biking in the nearby hills, water skiing and windsurfing. After the 2019 ASCRS Meeting in San Diego, I rented a car and drove to the Grand Canyon, which I hiked all the way down to the Colorado River and back up to the rim in one day. It was a challenging 30-kilometer hike with 3,000 meters of altitude change but well worth
the effort. Another hobby of mine is flying a small drone. I like to record drone videos while traveling. Drones are not allowed in Grand Canyon National Park, so this time I left my drone at home. I often start or finish my scientific presentations with a few seconds of footage of our clinic from the air that I recorded using my drone. 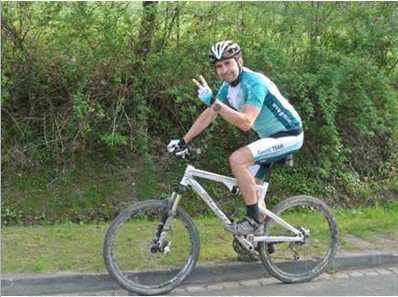 As an ESCRS board member, what do you expect from the ESCRS annual meeting in
Amsterdam?

The annual ESCRS meeting is the most significant meeting for anterior segment eye surgeons. Besides the tremendous amount of
scientific and clinical information, it is also an important social event where you can meet not only European leaders but also KOLs from all over the world. For me, this is the meeting with
the highest concentration of new information in ophthalmology. I regularly present several
presentations there and also serve as an instructor in wet labs and courses. Younger doctors from our clinic are active members of the ESCRS Young Ophthalmologist’s committee, which contributes to the scientific program more and more. 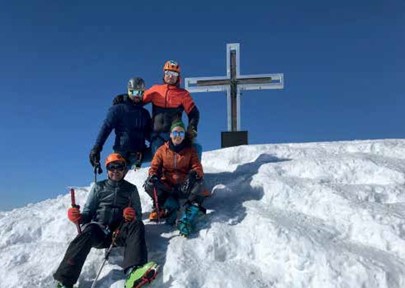 You implant over 1,000 trifocal lenses each year, and you were one of the first in the world to implant Acriva Trinova IOL. What is your experience
with this IOL?

Trifocal IOL is my favorite implant. I have been using VSY Biotechnology products for many years, and they amazed me with a
brilliant idea of smooth trifocal optic of Acriva Trinova IOL. This IOL is easy to inject. And there seems to be less halo and glare. Patients adapt to current trifocal IOLs quite fast. But as the quality of vision is critically dependent on proper centration with trifocal optics, I recommend using a capsular tension ring in every eye implanted with trifocal IOL to ensure proper long-term centration, even in cases of capsular fibrosis. 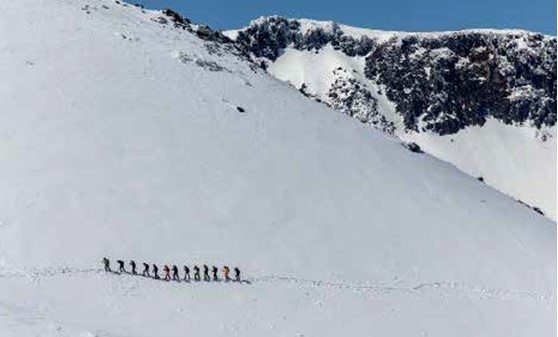 You were named as one of the top eight ophthalmologists in Vienna by Kurier. What is your practice in Vienna focused on?

In Vienna, we perform mostly laser refractive surgery. Femtosecond laser lasik is our
most frequent procedure in Vienna. We also often perform what is called lasik extra, a
combination of lasik and limited corneal crosslinking to stabilize the cornea after refractive
surgery. As no touch PRK is quite popular among Austrian patients, this is also a part of
our portfolio.