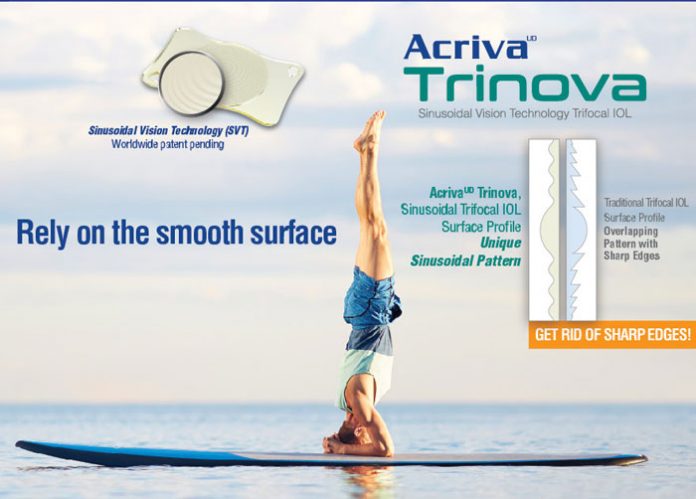 Acriva Trinova Comes to the Fore with its Four Main Features

The World’s first and only Sinusoidal Trifocal IOL Acriva Trinova used by Ophthalmologists in 64 countries across the world to correct cataracts and for refractive lens exchange attracts more attention with its four main features. 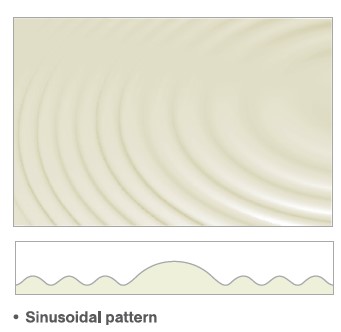 Acriva Trinova minimizes scattered light by its sinusoidal optical surface with smooth stepless zones and therefore minimizes the risk of post-op dysphotopsia such as halos
and glare. Scattered light is common with traditional trifocal IOLs that have an overlapping pattern with sharp edges. 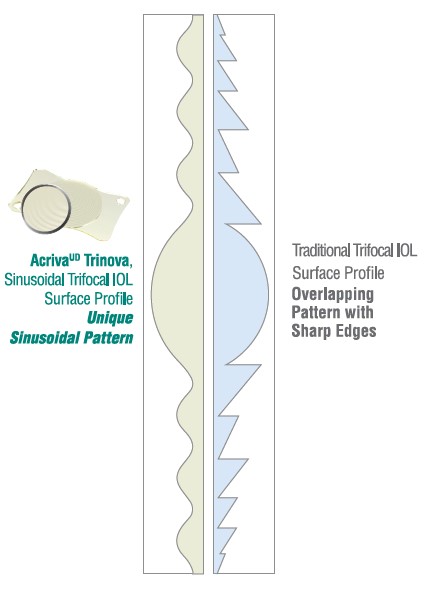 At 92%, Trinova Provides the Highest Light Transmission to the Retina Among All
Trifocal IOLs

With its Sinusoidal Optical Surface, AcrivaUD Trinova Has the Widest Depth of Focus of All Trifocal IOLs 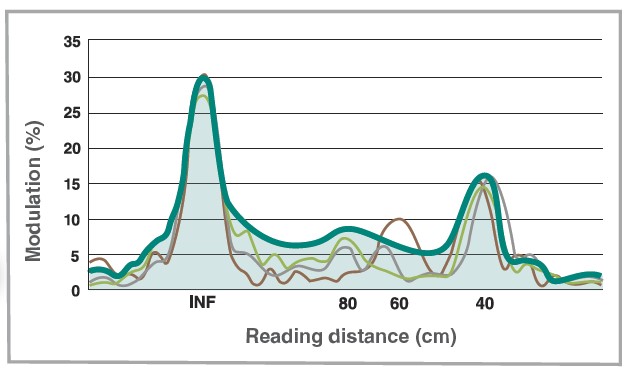 Technological developments and lifestyle-changes are factors that compel some individuals to have good near vision to perform their daily activities.
Acriva Trinova’s +3.00D near addition and +1.50D intermediate addition are designed specifically with patients’ life-quality in mind. From 38 cm to 80 cm reading distance will cover all daily requirements for near and intermediate vision.

Angle kappa is the angle between the visual axis and the pupillary axis. The larger the kappa angle, the more central your pupil is in the cornea from the visual axis, the higher the chance of negative dysphotopsia.(1,2) This measurement is of paramount consideration in cataract and refractive surgery, as proper centration is required for optimal results. The angle kappa may contribute to IOL decentration and its resultant photic phenomena. If the lens is significantly decentered because of a failure to accommodate for the angle kappa, then central light rays may miss the central optical zone and pass through one of the multifocal rings, which leads to glare. In 2012, Berdahl suggested that MFIOLs are unacceptable for use if the angle kappa is greater than half of the diameter of the central optical zone for the respective lens.(2) In this case, the size of the central ring plays an important role. Clearly , an IOL with a large central ring may tolerate the large angle kappa to a much higher degree than an IOL with a small central ring.(3)